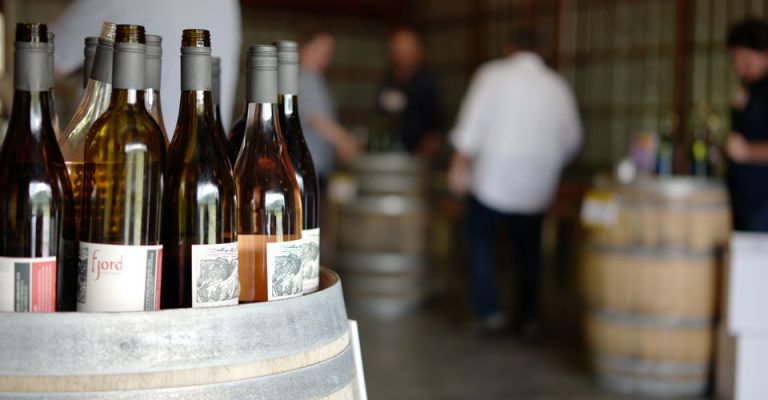 For those of you that know us, we are co-founders of the Hudson Valley Cabernet Franc Coalition, and earlier this summer Hudson Valley Wine Magazine sponsored the Coalition’s first barrel tasting event to showcase some of the top Cab Francs being grown and produced in the region.

So when Lori Budd, creator of the official #CabFrancDay (December 4th each year) and the Exploring the Wine Glass podcast series offered to drive up to the Hudson Valley to meet the winemakers that gathered around the Hudson Valley’s signature grape for this event, we were happy to have her join the festivities.

The event gave Cab Francophiles an opportunity to engage with winemakers and owners and sample the bounty of Cabernet Francs crafted by the Coalition’s Legacy members. Some wines had been tapped right from the barrel just for the occasion only a few hours earlier and were poured from unlabeled bottles with nothing but a strip of blue tape and marker scribbles to identify them. There were new releases, rosés, and some rare, hand-picked library wines, like the magnum of Benmarl’s 2012, and one of the last remaining bottles of Robibero’s 2013—in all, nearly two dozen home-grown Cab Francs.

You could clearly taste the difference in wines made from grapes grown on the east versus the west side of the Hudson, or in the case of Glorie Farm Winery, grown on east versus west blocks in the same vineyard. Each of the Cab Francs were made in the winemaker’s own style yet all were distinctly Hudson River Region.

We chatted with dozens of other Cab Franc enthusiasts who ventured out for this inaugural event on what was yet another misty evening in the Hudson Valley. But no one seemed to mind the weather. The wines were poured just as steadily as the raindrops, and the stunning scenery at Nostrano Vineyards where the event was held, completed the enchanting experience.

If you missed the Coalition’s first barrel tasting, grab a glass of your favorite local Cab Franc and listen in to Lori’s podcasts. Feel her exuberance (and the party atmosphere!) as she digs into her favorite subject with some of the Coalition’s Legacy members: Milea Estate Vineyard, Millbrook Winery, Robibero Winery, Benmarl Winery, Nostrano Vineyards, Whitecliff Vineyard & Winery and Glorie Farm Winery.

LISTEN TO THE EPISODE

Linda Pierro is co-founder, managing editor and design director of Flint Mine Press, Hudson Valley Wine Magazine and the Ultimate Cider Guide. She is a co-founder of the Hudson Valley Cabernet Franc Coalition and writes on local wine and spirits. Linda is a design and marketing professional working in the Hudson Valley and NYC with more years of experience under her belt than she cares to think about.