The Best (Local) Way To Toast the Holidays 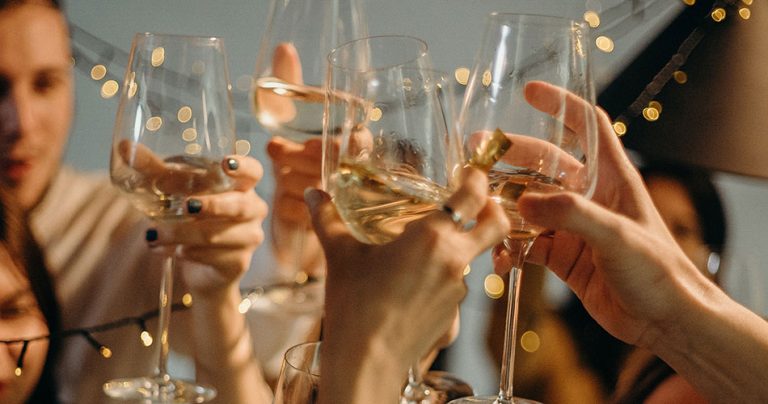 Cheers to the holidays! Now what should we drink? While there’s another red, white and blue flag that often comes to mind when we think of celebratory sparklers, there are many other equally delicious, American wines, ciders, and spirits worthy of your holiday table. In the spirit of holding the near and dear closer to us during this time of the year, we would argue that the more local the libation, the better. Also, with the tariffs many European wines are currently contending with—and the future ones they may be facing—your wallet will thank you, too, if you #drinklocal.

Below, our favorite ways to welcome in the New Year and toast to the new decade.

Champagne can only technically be labeled as such if it hails from Champagne, France. But winemakers everywhere can make sparkling wine in the traditional Méthode Champenoise. Simply put, it means a sparkling wine was created using the methods invented by French monks in the 1600s, and involves a secondary fermentation in the bottle. Producers add a mixture of sugar and yeast to still wine, which is then placed in bottle. Yeast eats the sugar, carbon dioxide (and bubbles) result, and the wine is left in situ for a minimum of six months.

At the end of its resting period, bottles are moved and rotated to loosen up those dead yeasts (lees) created during fermentation, in a process called riddling. It involves the gradual tilting of the bottle neck-down, and the rotation of it in small increments, with slow increases of the angle. This allows gravity to slowly force the sediment to collect near the top of the bottle in preparation for disgorgement, or the famous cork-popping.

Look for sparkling wines that are labeled Méthode Champenoise for a superior, traditional sparkling product.

Brotherhood Winery Grand Monarque Cuvee Champagne
This is one of Brotherhood’s most iconic and traditionally produced wines, and is credited with putting New York-made sparkling wines on the map when it was introduced at the Paris Exposition back in 1900. Made from classic Champagne grapes, Pinot Noir and Chardonnay, it is aged for a minimum of two years and hand-riddled in the winery’s underground cellars. The end result is a dry Champagne with rich flavors of nuts and orange zest, lingering bubbles, and a lust for life. (And, yes, they can call it “Champagne” because its long history allows for grandfathering it in.) Retail: $44.99

North River Blanc de Blanc
Whitecliff Vineyard’s North River estate-bottled brut sparkling is made from Chardonnay grapes grown in the Hudson Valley region. This 2014 vintage rested four long years in the bottle sur lie (on the lees) before the final step of disgorging. The traditional method of second fermentation in the bottle imparted delicate, nose-tickling bubbles, and complex yeasty flavors of buttered brioche with hints of green apple and lemon zest. Honeysuckle rounds out the finish for a truly sophisticated sip. Retail: $29.95 $26.95 (on sale through 12/31/19)

Brimstone Hill Domaine Bourmont Sparkling Wine
Brimstone Hill Vineyard has been making dry sparkling Méthode Champenoise in small batches for more than thirty years. Local and estate grown grapes like Cayuga, Seyval Blanc, Vidal, and Chardonnay are the backbone of this clean, lightly-hued sparkling wine that when uncorked greets you with a bouquet of fresh baked bread. Taste, and you’ll find a subtle, toasted nutty flavor balanced with acidity. This is a lovely bottle to welcome the New Year or kick off a major holiday dinner. Retail: $18.52

Other celebratory options to consider are fun bubblies, and special ciders and beers. There are far too many delicious local options to list, but we’ve included some regional classics, welcome at any occasion.

Brotherhood Winery B Sparkling Rosé
Made from 100% New York Chardonnay and Pinot Noir, at about one-third of the price of a traditional Champagne, this sparkler performs well above its weight class in terms of flavor and verve. Unlike wines produced in the traditional Méthode Champenoise, B Sparkling is fermented a second time in the Charmat method which uses pressurized tanks to trap the bubbles in the wine. The result is fresh grape aromas and notes of green apple, ripe strawberries, fun. It pairs with finger foods and all kinds of apps, and it’s also the perfect “pink” to pop at brunch when party people are in recovery mode. Retail: $13.99

Brooklyn Cider House’s Kinda Dry and Half Sour Ciders
Cider always feels festive, and it appeals to all categories of imbibers. Brooklyn Cider House stakes its rep on consistently creating new, funky ciders that manage to equally enchant and confound its fans. The Kinda Dry is an off-dry cider featuring tart, just-plucked apple flavors and a balance of savory honey flavor on the finish. Half Sour offers a more floral bouquet and citrus notes, along with pear and a lively, lilting lactic funk. A versatile pair to bring to the table. Retail: $9.99

Naked Flock Currant Saison Hard Cider
Naked Flock is an early pioneer in the Hudson Valley’s cider movement, creating its first hard cider in 1996. One of the most consistently popular is their Currant Saison, a blend of locally grown apples and currants, and the perfect cider for beer-and wine-lovers who aren’t sure how they feel about fermented apples. The currants here lend a piquancy and tartness not typically associated with cider, but certain to perk up any party. Retail: $10.49 (4-pack)

Sloop Brewing Co.’s (No) Santa New England IPA
For the iconoclasts, here is a holiday brew without any of the ginger, candy, or cinnamon flavors commonly found in syrupy Christmas and Hanukkah beers. Instead, the (No) Santa NEIPA features a hearty dose of hazy hops, with flavors of stone fruit, sour grapes, golden berries, and sage. Retail: $13 (4-pack)

When the clock ticks past midnight, it’s time to take a seat by the fire and reflect. Make like Mark Twain and kick back with a glass of something you can sip and swirl slowly.

Orchard Hill Ten66 Pommeau Reserve
Inspired by Pommeau traditionally made in Normandy, France—and named for the year of the Norman invasion of England in 1066—this creation is made from apple brandy aged in French wine oak barrels, then blended with fresh orchard-apple juice and aged again in barrels for four to seven years. Concentrated, rich flavors of tarte tatin (think buttery apple pie), vanilla, and toasted butterscotch. Something to savor at 18.5% ABV. Retail: $50

Paperbirch Raspberry Fine Ruby Dessert Wine
This truly unique drink is what to open after dinner when the kids have settled down for the night; or to bring to an adult party where adults want to act their actual age, not half of it. Made from Hudson-Chatham Winery‘s aged port, then blended with just the right amount of raspberry dessert wine, it features fresh notes of berry fruits, with the architecture of real port. Retail: $14.95