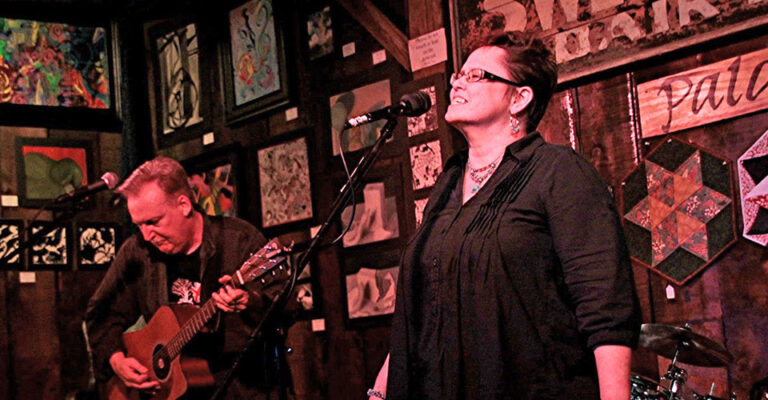 Can music affect the way wine tastes? Or does a great band just improve your experience at a winery? It’s no surprise that moods are noticeably altered while sipping a local libation and listening to some of the amazing bands that rotate in and out of region’s tasting rooms. But according to researchers, there may actually be more to it than the simple pleasure of pairing wine with music.

The jury is out on whether classic rock will make a Hudson Valley Cabernet Franc or estate-grown Chardonnay more intense and robust, and whether acoustic folk music will make the same wines taste more floral and feminine. So go forth and gather data for science…or, just use this primer to figure out where to go to listen to your favorite kind of live music at the Hudson Valley’s wineries.

The world of live music is as whimsically changeable as it is entertaining and exciting, so check the wineries’ websites for dates and times before heading out.

Tribute bands can sometimes be even more fun than the real thing. We get the joy of hearing the music we love, without the pressure of needing to devote laser-like focus to each note.

Stone Flower embodies the high-energy, percussive passion of the Hall of Fame artist Santana and his legendary band. Their name was lifted from the celebrated cut of the same name from Santana’s Caravanserai. The album—and in many ways the band—tracks Santana’s evolution from Latin rock/blues and fusion, to Afro-Cuban collaborative rock. You’ll find Stone Flower many Saturdays at Palaia Winery & Meadery.

Feast of Friends is a step back in time with the Doors. The band plays classics, deep cuts, and their own originals. They can frequently be found, well, all over. In the next few months, they’ll be popping up at Keegan Ales, Grand Cru Beer & Cheese, and Torne Valley Vineyards, to name a few.

Classic rock encompasses many distinct sounds, but it all tends to involve laid back, pitch-your-head-back-and-forth, rocking grooves. Hurley Mountain Highway’s four-piece, acoustic-electric outfit fits the bill, with a focus on the happy hits that cranked out of AM radio in the 60s and 70s. If you’re thinking Elton John, Peter Frampton, Bob Dylan, The Byrds, and Van Morrison…you’re on the right track. Hurley Mountain can often be found at Palaia Winery & Meadery in Highland Mills and at Applewood Winery in Warwick.

Evan Teatum and Alan Battiatto are a two-man band, with Evan on guitar and vocals, and Alan on the drums. Evan spent eight years in a Beatles tribute band, and while his love of the Fab 4 shines through, with Alan they take improvisational turns that are captivating to follow. Like Hurley Mountain Highway, you can bop along with them often at Palaia Winery & Meadery.

Big Time Tomato cranks out classics that span the 60s to 90s, from the Allman Brothers, Grateful Dead, and Lynyrd Skynyrd to Grace Potter and Carly Simon. Lead by the multi-talented Jim and Michelle Iannucci, the band also features Palaia’s own Jan and Joe Palaggi, who tend to do double duty and take to the stage on Sundays at their own joint. Jan sings and Joe plays bass, sometimes accompanied by the rest of their eclectic and exceptionally talented musical family.

Dylan Doyle was born in the South and raised in the North, and his interests reflect the regions’ musical strengths and passions: roots, rock, jazz, funk. The amalgamated brew may not fit into a neat musical slot, but it feels uniquely contemporary because of it. Doyle has played with Rob Stoner, Ben Cauley, Bill Payne and many other notables, and frequently tours Europe and the rest of the U.S. Find him at Warwick Valley Winery & Black Dirt Distillery and Gardiner Brewing Company on weekends, when he isn’t on tour.

Marc Von Em is a one-man band who uses his acoustic guitar and rich voice to move between blues, folk, and funk. Marc’s captivating performances are punctuated by impressive harmonica playing which often accompanies his blues-induced original material. He plays frequently at Brotherhood Winery.

Whether or not jazz can tease additional unexpected layers out of our Hudson Valley vino, or if mellow, acoustic grooves bring out the red fruit and spice, one thing is clear: music and wine, when consumed together on relaxed weekends in the vineyard, almost always lead to a good time.

KJ Denhert blends urban folk and jazz, and her talent in this arena has earned her four Independent Music Award nominations. She has residencies at bars in Manhattan and St. Barth’s, and has played at the Umbria Jazz Festival in Italy. Check out her moving, soulful performances at Brotherhood Winery.

Greg Wachala has built a reputation as a jazz guitar performer and instructor on his ability to improvise and cross over genres while staying true to jazz. He has recorded with multi-Platinum artist Jay Proctor and has performed with jazz greats like Craig Schulman and Rick Balestra. But when he isn’t rocking out shows in Vegas and NYC, he can be found gigging happily across the Valley. Catch him at Nostrano Vineyards or Millbrook Vineyards & Winery.

Going to see live music at a winery is like downloading a few hits on your phone—going to a music festival at a winery is like buying an album set. Set aside the mental and temporal space, and if you’re going to do it, go all in. Save the dates for these.

BOB DYLAN FEST: Musicians pay tribute to Bob Dylan and the music and movements his music inspired. Held at Warwick Valley Winery & Black Dirt Distillery on Memorial Day Weekend, expect a lot of Dylan plus great food and a rollicking but completely under-control vibe. The fest is held outdoors in the orchard which serves as a natural amphitheater and a stunning backdrop. Follow this fest up with Warwick’s Watkins Glens Tribute Festival on July 12th, the Cash & Country Music Festival on August 1st-2nd (conveniently on New York Whiskey Weekend), and the Grateful Dead Tribute Festival on August 22nd-23rd.