Warming Up to Port 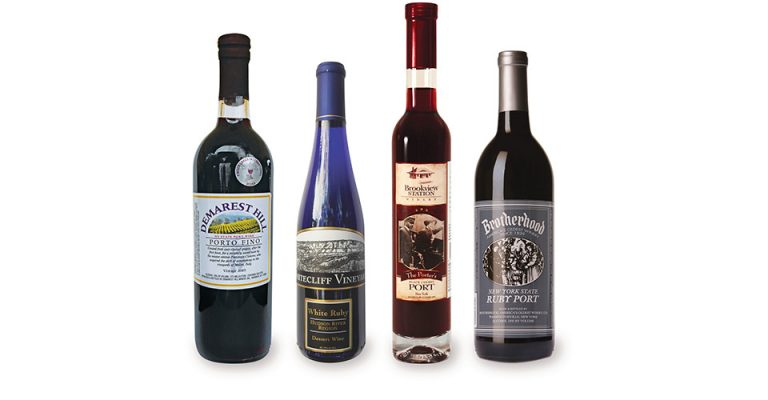 Locally-produced dessert wines are a specialty in the Hudson Valley. Dessert wines, which tend to be sweeter and more alcoholic than regular table wines, can include late harvest wines, sherries, ports, and fortified fruit wines such as cassis, which is made from currants. And while you may think that some of these wines are solely after-dinner sippers to be enjoyed after a heavy meal with a cigar, in the Hudson Valley you’ll find these wines to be fresh and approachable. You might consider them in a cocktail or as an , but for this article, let’s focus on what commonly known as “ports.

A Primer on Ports﻿

There is often confusion about what constitutes a port, so one thing we should clear up first is: What exactly is port? Historically, “Port” (also “Porto” or “Vinho do Porto”) was a fortified dessert wine, usually red, that was produced exclusively in the Douro Valley in northern Portugal, near the coastal city of Oporto (Porto in Portuguese). It is “fortified” in the respect that brandy, or a neutral grape-based spirit, is added to the fermenting wine, which incapacitates the yeasts, and leaves unfermented sugar. The result is a richer, sweeter, dessert wine with a higher percentage of alcohol content, usually 18 to 23 percent. Ports, therefore, have a reputation for being higher in alcohol, noticeably sweeter, with more body and density than other wines.

Despite the popularity of ports worldwide, federal law and agreements between the United States and important European wine-producing countries have allowed producers in the U.S. to call their fortified dessert wines “ports”, but not in a way that indicates that they originate from Portugal. So, in the U.S., these dessert wines can be labeled as a “port” (with a lower case “p”), but not as “Porto” or “Vihno do Porto”, and must include the region or state designation.

Labels aside, what all ports have in common is that they have sufficiently high levels of sweetness to balance their high levels of alcohol and high total acidity. In contrast, table wines generally have between 11 and 13 percent alcohol. Ports are usually barrel aged for several years and are allowed to oxidize so that they mellow and become pale brick in color, and develop delicate flavors of nuts, brown sugar, and dried fruits and raisins.

The process of port making begins by filling a wooden barrel with red, white, or blended wines only eighty-five to ninety-five percent full. This air space purposely encourages oxidation (exposing the wine to air in order to break it down), which browns the wine and gives it a nutty bouquet and taste. This is part of their charm! The oxidation process, however, must be done in a manner that protects the wine so it does not turn to vinegar or become spoiled. This is accomplished through the addition of brandy (a grape-based spirit) that protects it from adverse bacterial growth. As mentioned earlier, the addition of brandy also raises the alcohol content from approximately 12 percent to 18 percent. (A note here: brandy starts as a wine that has been distilled, so that it is converted into a spirits beverage with approximately 40 percent alcohol (80 proof). Cognac and Armagnac, produced in France, are two well-known brandies. And, while brandy is made in limited quantities in New York, it is extensively made in California.)

Ports are generally classified by their sweetness and how long they have been aged in wood. Ruby Ports are generally not aged for very long, and have little oxidation, hence they are younger and retain much more of their full deep red color. Tawny Ports may have one to three years of barrel aging under their belts before being bottled, and are golden brown, or brick red in color, mellow, and moderately sweet. They can also be made in a process in which they are back blended with other older and younger ports to keep the same consistent taste year after year.

The character of a Vintage Port is derived not so much from oak maturation, as from bottle aging. These are often blends of Ruby Ports made from what are considered the best “vintage years”, and left to age and mature in the bottle for a number of years.

On the other hand, White Ports are made solely from white grape varieties and can be made from very dry to semi-sweet styles. White Ports are typically fruitier, and a bit fuller-bodied than other fortified white wines, and often served as an apertif, or in cocktails.

Ports, both red and white, are regaining popularity in the Hudson Valley, as they once were in the early 19th century at the beginning of commercial wine production. Ports are sometimes made here with fruit, instead of grapes.

Today, ports are made by Brotherhood Winery (Ruby Port and Vintage Port), Hudson-Chatham Winery (Paperbirch line of ports, including Raspberry Fine Ruby), Baldwin Vineyards (Sweet Port), Brookview Station Winery (Porter’s Port, a dark cherry port that ages like a Tawny), Kedem Winery (New York State Port Wine), Whitecliff Vineyard (Red Ruby and White Ruby made with Hudson Valley grapes and a Hudson Valley–produced spirit), and Demarest Hill Winery (which produces several, including an apple port). Each of these ports has a distinct bouquet, and a rich, yet nuanced flavor. Enjoy these warming wines with nuts, dried fruits, and local nutty cheeses, and welcome in the cooler nights ahead.