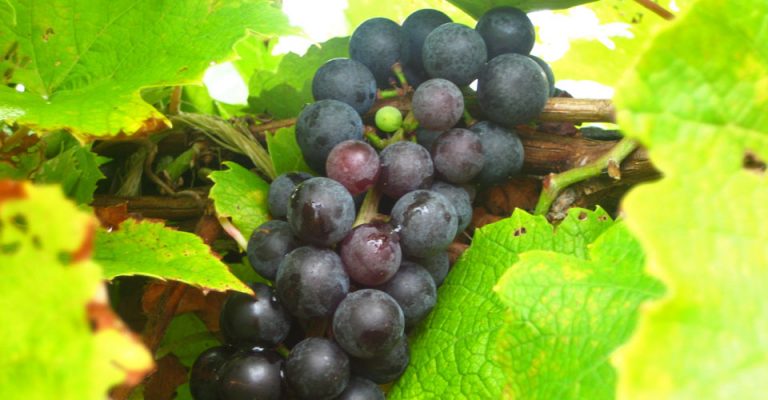 Noiret is a relatively new hybrid grape variety used in red wine production, offering another option for cold climate grape growers. It is becoming more widely planted in New York State, and is just now beginning to be seen in commercially available wines here and on the East Coast. Noiret was developed (and named and trademarked) by Cornell University at the New York State Agricultural Experiment Station. A cross of NY 65.0467.08 (NY 33277 x Chancellor) and Steuben, Noiret has been available for testing since 1994, but wasn’t officially released until July 2006. Along with Corot Noir, the two were the first of Cornell’s red wine grape varieties adapted specifically for grape growing regions in the Northeast.

Noiret’s genetic makeup is somewhat complex, and consists of 65 percent labrusca hybrids and other varieties native to the northeastern region of North America. Its ancestry includes early popular varieties like Diamond, Catawba, Iona, and Concord.

This is a highly vigorous variety that produces an abundance of vegetative growth and a high grape yield. Surprisingly, even with Noiret’s more labrusca parental background, it is still more cold-sensitive than hybrids like Corot Noir and Chambourcin. Because of the extreme thickness of the trunks, though, in severely cold winters the trunks can be lost due to splitting. After particularly cold winters in the Hudson Valley, Noiret’s grape production is noticeably reduced due to winter damage.

Noiret bud break usually occurs mid to late season at a time that is later even than the late-ripening Concord grape. Its harvest time is therefore late to very late, and it rarely achieves sugars higher than 21 brix in the Hudson Valley—a bit lower than comparable viniferas like Cabernet Franc and Pinot Noir. While this variety does not over-produce and may not need cluster thinning, thinning is often suggested not only to improve wine quality, but to ensure that the crop ripens before the first fall frost.

The breeders at Cornell note that Noiret wines are “richly colored” and have overtones of “green and black pepper along with raspberry, blackberry, and some mint aromas.” Noiret has a fine tannin structure that is complete from the front to the back of the palate. Its good tannin structure and the absence of any hybrid aromas strongly distinguish Noiret from other red French-American hybrid grapes.

Noiret’s color can be a dark ruby red with purple hues that is also suitable for Port production. The Steuben lineage of Noiret is evidenced by its “tootie-fruity” cherry and strawberry fruit tastes that can be traced to its high percentage labrusca heritage. When made well, Noiret can have a good, medium-bodied tannin structure that supports its fruit of choke cherries, blueberries, black raspberries, cooked plums, and grape juice. While the nose can be muted, its structure might best be described as being flinty and metallic, with the spice of black pepper and wood resin. Because of its distinct black pepper character it has been compared to Petite Syrah and Pinot Noir.

While the flavor profile can be good, Noiret is more interesting when blended with other grape varietals. Alone, its balance can be soft, and as a single varietal wine it can be one dimensional, without peaks or valleys. It is, however, proving to be a good addition to red French hybrid or vinifera blends and, as noted, makes an excellent base for a Port wine. Noiret can help round out a blend, adding a smooth, lightly-spiced finish, or big pepper aromas and taste. In the Hudson Valley, popular releases have included 50-50 blends with Cabernet Franc or Marquette, and it can even be found in blends with DeChaunac and Merlot.

Because wine from Noiret grapes does not have the high acidity that can be found in some of the French hybrid wines, when blended its tannin structure lends itself to the production of quality wines with good aging potential. In fact, Noiret picks up an added richness when it is aged in oak barrels.

In the past year or two, there have been increased plantings of Noiret in several vineyards in the Hudson Valley, with fruit expected to mature over the next few years. Noiret has the future potential to make big, bold reds, so look for even more blends to appear in vintages to come.