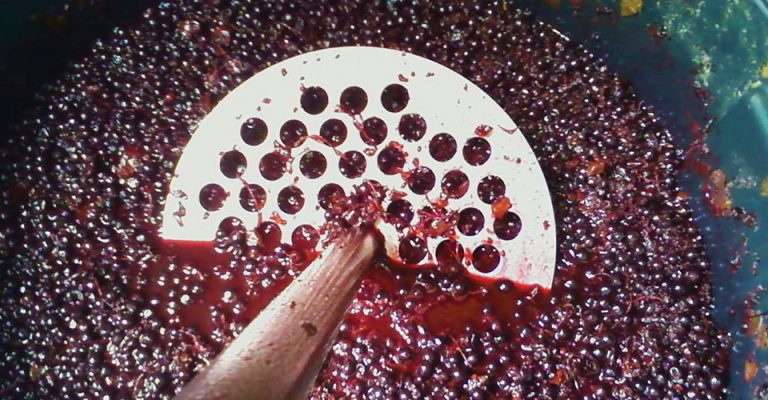 New York State was once the leading commercial producer of currants in the U.S., which could be found in everything from jams and preserves to syrup and Cassis wine and liqueurs. While production of currants in New York declined significantly in the twentieth century, currants and cassis are making a resurgence to gain their rightful prominent place in Hudson Valley culture.

Currants, in red, white and black varieties, are native to central and northern European countries. These very winter-hardy plants eventually made their way into family gardens in France, England, Germany and Austria, so that by the mid-sixteenth century, the red and white varieties were being imported from Europe to the colonies in New York and the New England for cultivation.

Officially, currants are a fruit-bearing shrub, classified as part of the genus of plants known as Ribes. This family includes red and white currants (Ribes rubrum, R. sativum, and R. petraeum), and black currants (Ribes nigrum), all of which were cultivated in northern Europe. Red and white currants grow on strands or clusters that range from two to five inches long, while black currants grow on much shorter stemmed clusters of about three to five berries. The currant berry is about the size of a small-to-medium sized blueberry. Currants ripen at a time of year when other fruits are scarce – they bud in the early spring and their crop is often harvested right after July Fourth. Just like grapes and fruit trees, currants must be pruned early before budding so that they can bear a suitable crop.

Currants are by nature northern plants and they thrive in cooler climates which is why they are extensively grown in northern and central Europe, in countries such as Germany, Poland and Russia. In North America, they grow well in New York, New England, Michigan, and Canada. The deciduous bushes can reach up to five feet tall and are just as wide, and prefer heavy, damp, rich clay to loam soils that retain moisture; they like morning sun and afternoon part-shade so that their leaves do not scorch.

In the U.S., currants – red, white and black – have traditionally been used to make jams, jellies, preserves, pies, tarts, sauces to accompany meats, and yes, alcoholic beverages such as cassis, liqueurs, and wines (more on that to come). In early America currants were deemed to have medicinal properties (they are, in fact, high in vitamin C and other antioxidants), so they were also used in home remedies and elixirs of all sorts.

Currants in the Hudson Valley

In the early part of the twentieth century, according to agricultural census information, New York State ranked first in the production of red currants, with a good percentage being grown in the Hudson Valley. Approximately 2,671 acres of red and white currants were grown in New York in 1919, however, due to a destructive blight that affected currants from 1891 to 1913, the acreage gradually declined to 1,306 acres in 1929, 540 acres in 1954, and only 393 acres in 1959. After that, red and white currants became a “specialty crop” that was only grown in Chautauqua County, and the fruit growing areas of the Hudson Valley.

Historically, because of their growth habit and tolerance of shade, a common practice was to grow currant bushes under grape vines within the vineyard, or under fruit trees which were often planted at the end of every other vineyard row. Red and white currants were commercially popular in the Hudson Valley and were most often used together, since jams and preserves made solely with white currants were thought to be unappealing in appearance.

While the Federal ban was lifted in 1966, New York State continued its ban on the cultivation of black currants until 2003. That year, New York State Senator William J. Larkin, Jr. (R-C) of Cornwall-on-Hudson, introduced a bill that became law which lifted the ban on the cultivation of black currants in fruiting districts, or potential fruiting districts, such as those that exist in the Hudson Valley. This bill was part of a legislative program of bills initiated by the NYS Senate Task Force for Hudson Valley Fruit Growers, chaired by Senator Larkin (whose Counsel was yours truly). The bill was signed into law on August 5, 2003, by Governor George E. Pataki of nearby Garrison, whose family, incidentally, were fruit and currant growers from Peekskill.

In the past decade there has been renewed local interest in fruit cultivation with an increasing number of small fruit farms being established in the Hudson Valley. Consequently, with the ban lifted, currant cultivation is also on the rise: In 2002, there were 15 farms that grew currants in New York State; in 2007, this number increased to 67 farms, with 21 of these farms being located in the Hudson Valley region.

Growers are now beginning to evaluate the dozens of red and black currant varieties that exist, to determine which ones will produce the best quality fruit in the Hudson Valley. With varietal names like Cherry, Wilder, Red Dutch, Champion, Perfection, Prince of Wales and even White Grape, comparisons to the Hudson Valley’s grape culture are inevitable.

This is an exciting time for currants growers in the Hudson Valley because the market for this fruit is expanding. Currants’ high levels of vitamins A and C, anthocyanins (flavonoids), and total phenolics have proven to possess a high antioxidant quality, so they are once again gaining popularity as medicinal creams, teas and syrups. And cultivating black currants for the production of cassis and other alcoholic and non-alcoholic beverages is also on the rise.

Fresh black currants have a strong and unusual flavor. They are not pleasant to the taste—they are bitter, herbaceous like juniper berries, dry, acidic, and with enough tannin to practically rip the enamel off your teeth.

However, when made into a still wine, liqueur or cordial, they can have a big, musky yet velvety feel with fruit flavors of cooked prunes or mulberries, chocolate, and plums. Black currant liqueur, which can be made either semi-dry or sweet, is intense and thick with a very dark purple color. It has often been likened to drinking a jelly preserve – a thick, rich taste with deep, jammy berry notes. The level of sweetness helps to determine its viscosity, balance, and how it is to be consumed. In the end, it is the balancing of the tart and the sweet, with its fruity taste, that produces its silkiness.

Cassis is the specialty liqueur produced from black currants that originated in the French region of Burgundy where it is officially known as Crème de Cassis. Most Americans are familiar with cassis as a dessert cordial, though more often than not they are introduced to Cassis when mixed in a cocktail. Cassis can be used to make a simple Kir when added to a dry white wine; a Kir Royale is made by mixing cassis with Champagne (when mixed with a white sparkling wine, i.e., not from the Champagne region, it is called a Kir Pétillant) – so-named in honor of Félix Kir, mayor of Dijon in Burgundy, who popularized the cocktail in post-War France. When added to a red Burgundy or Beaujolais-style wine the result is the French drink known as a Cardinal (after their red robes) or Communard  (i.e., the communist “Red Menace”). In most cases, the proportion of cassis to wine is often up to the taste and preference of the drinker.

Cassis is rapidly becoming something of a specialty in the Hudson Valley too, and is now being produced by an increasing number of wineries and distilleries, including Brookview Station Winery, Clinton Vineyards, Glorie Farm Winery, Hudson-Chatham Winery, Tousey Winery, Tuthilltown Spirits Distillery, and Warwick Valley Winery & Distillery.

Black currant wines and liqueurs are produced in many different ways and every cassis or black currant wine maker approaches the process differently. The level of alcohol and expression of fruit changes from maker to maker. While everyone begins the process with fresh, local black currants, there are plenty of variations. For example, Tousey uses four different varieties of currants in their Créme de Cassis, Glorie Farm Winery uses at least two in their Black Currant Wine; Hudson-Chatham Winery macerates the fruit for over two-and-a-half months to make their Paperbirch Cassis Dessert Wine; and Tuthilltown Spirits Distillery macerates the fruit in whiskey-cured American Oak barrels with a small portion of the black currant bush’s leaves. This gives their Cassis Liqueur a more tannic structure (think: dry leaves or black tea).

Making cassis is an arduous task that requires patience, and lots of currants, as they do not produce much juice even after water is added to hydrate them. In fact, the amount of currants needed to make just a 375ml half bottle of liqueur is about three times as much as what is needed to make one 750ml bottle of wine from grapes. The maker has the additional challenge of balancing tartness with sugar to achieve the appropriately high alcohol level. This requires that sugar be added slowly and painstakingly to the fermenting fruit over the course of several months. Instead of sugar, some cassis makers use honey to balance out the acidity of the tart fruit, as with Warwick Valley’s American Fruits’ Black Currant Cordial. Tousey Winery also takes this approach, using honey from their own bees.

The process gets even more diverse with black currant cordials and liqueurs. Both Tuthilltown and Warwick add the fresh, macerated fruit directly to a distilled spirit or brandy base to infuse the flavor into the alcohol. After initial fermentation, Brookview Station Winery adds a fruit-based alcohol to the must to produce their Conductor’s Black Currant Cassis. These methods can create a product that is naturally a bit higher in alcohol, ranging from 18% to 22%.

In all versions of Hudson Valley Cassis, the big, sweet-tart taste of fresh black currant is evident, whether made as a wine, liqueur, or in a true crème de cassis-style – thick and sweet like its French counterpart. Cassis should be treated like a port or brandy; expect the profile to change the longer the bottle is opened.

With a growing number of Hudson Valley producers currently making black currant cassis, liqueur, and wine, there are plenty of samples to be had. Experiment with them as an aperitif, on the rocks or in a cocktail, drizzled over fruit salad or ice cream, or sipped as a dessert cordial.

It should be pointed out that the locally grown, American red and black currants (Ribes species) are not at all related to the popular dried black fruit found at the grocery store. Those “currants,” often used in baking, are known as the “Zante currant,” and are in reality a small, seedless, berried grape variety (botanically belonging to the Vitis vinifera grape family), and are usually dried to make raisins.

Although labeled as “currants,” the “Zante currant” takes its first name from the Greek island of “Zante,” where these raisins are produced. It was the British, sometime in the late 1500s or early 1600s, who dubbed these dried Greek grapes “currants” – a reference to the Greek port of Corinth, where supplies of this fruit shipped out to western Europe, and a corruption of their French name “raisin de Corinthe,” or Corinthian grape. Early English texts alternatively called this dried grape by several names: reysonys of Corawnce, Corinthes, corans, currantes, currans, and bastard corinthes. The name “currant” was eventually applied to this species of Ribes because of its resemblance to the “grape of Corinth.”  —R.B.