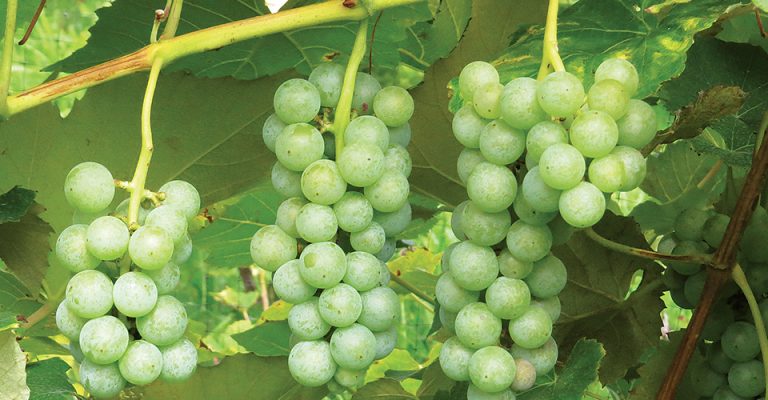 In the second half of the nineteenth century, the Hudson Valley was a cradle of horticultural activity and learning. Between the decades of 1860 and 1890 there was a real synergy between local grape breeders, nurserymen, growers, and horticultural writers that helped to advance American viticulture and led to the development of many new inter-specific grape varieties, which we now call Hudson Valley “Heirlooms.”

During this “Golden Age” of Hudson Valley grape breeding, many of these hybridizers were enthusiastic amateurs that had other careers ranging from practicing medicine to book binding, to being full-fledged nurserymen. These breeders were much more than hobbyists – they were also active members of national and regional horticultural organizations, such as the American Horticultural Society, the American Pomological Society, and the New York Horticultural Society. They actively participated at meetings, exhibited their new grapes (or other newly-bred varieties of fruits such as raspberries, strawberries, and currants), and prolifically wrote treatises and articles about their work.

Many of the hybridizers lived in and around Newburgh (Orange County), or within a vicinity of five to 20 miles from each other, in Marlboro, Poughkeepsie, Iona Island, and Croton Point. These included Andrew Jackson Caywood, Dr. William A. M. Culbert, Dr. Charles William Grant, James H. Ricketts, Dr. Richard T. Underhill, and his nephew Stephen W. Underhill. Culbert, Ricketts, and the Downing brothers (A. J. and Charles) who were both nationally known horticulturalists at the time, lived within five blocks of each other around Liberty Street, in the then Village of Newburgh. This proximity allowed for frequent visits to each other’s operations, and they openly shared information about their work.

The goal of these hybridizers was to increase the quality of table grapes grown in the Hudson Valley while increasing grape quality for wine production. Studying the methodology of these hybridizers, they crossed the enhanced quality characteristics of European vinifera varieties, such as Black Hamburg, Muscat Hamburg, and Chasselas de Fontainbleau, with the commonly-grown labrusca varieties such as Delaware, White Concord, Diana, Hartford, Israella, and Concord, and with local riparia varieties such as Clinton, to achieve positive results.

At that time, as is the case now, there were many experienced fruit growers in the region who could test these newly-developed varieties in the field, and advise the breeders on their growth habits and potential. These included families such as the Barneses of Middle Hope (whose homestead still exists on Route 9-W), and the Clark family, who operated a foundry at the base of Washington Street in Newburgh (called Clark & Kimball), who grew these grapes and other fruits in their spare time as a recreational pursuit.

Heirlooms, Then and Now

Ricketts was the most prolific of the Hudson Valley grape breeders, developing more than 100 separate varieties, with A. J. Caywood being the second most significant breeder with approximately 15 named varieties. The Underhill family’s operations in Croton Point led to five named varieties.

The hybridizers bred both red and white grape varieties during this period. Focusing on the popular white varieties, the more prominent of these include: Dutchess by Caywood; Iona by Dr. Grant; Empire State and Jefferson by Ricketts; and Croton by the Underhill family. These white grape varieties also had the ability to be used for table consumption.

While it’s still uncommon, more growers are starting to plant these Hudson Valley–developed white heirloom grape varieties, not just in this region, but in the Finger Lakes and on the West Coast. At my farm Cedar Cliff in Greene County, I have been experimenting with growing and making wine from these heirloom varieties for more than 30 years, and have approximately 20 varieties that I distribute to local growers.  While these grapes are labrusca-based hybrids, they are not like your average Concord or Niagara wines, with the so-called “foxy” taste. They are soft, subtle wines with lots of complex tropical fruit and Muscat flavors. The hope is that these Hudson Valley varieties will intrigue the palate of a new generation of wine consumers looking for true local flavor.

Some of the most notable white varieties developed in the Hudson Valley in the 1800s are ideal for wine production today.

Dutchess  This variety, bred by Caywood, comes from a White Concord seedling pollinated by mixed pollen of Delaware and a grape called Walter. It was planted in Poughkeepsie in 1868, and introduced to the public in 1880. In the 1890s, it was considered one of the premium, native white wine grapes developed in the U.S. The wine is subtle, delicate, and soft, yet complex. It is clean, and reminiscent of pears and melons with an added smoky nose and taste as the wine ages.

Iona  Dr. Grant planted this seed on Iona Island (reputably a seed of Diana planted in 1855, but it may have also been a chance seedling of Catawba, which are related varieties). It was introduced to the public in 1864, and was a widely planted variety from the 1880s until the 1920s. Its berries have a unique pale to dark pink/red hue, but it makes a white wine that has a delightful and soft labrusca taste. It is similar in quality to Delaware, but is much softer, rounder, and approachable, with flavors of guava and watermelon. A perfumey and welcoming, fun wine.

Empire State First fruited in 1879, this variety was bred by Ricketts in Newburgh and introduced to the public in 1884. It comes from a seed of Hartford pollinated by Clinton. Its flavor profile is more of a Muscat, rather than having the foxiness of a labrusca variety, such as Niagara. In the 1890s it was a quality grape used especially for sparkling wine production.

Jefferson  Bred by Ricketts and first fruited in 1874, it is from a seed of Concord pollinated by Iona. Jefferson has very attractive red clusters, and makes white to blush-colored wine with soft labrusca flavors and hints of strawberry in both nose and taste. Its attractive color, cluster size, and juiciness also made it a quality table grape.

Croton  Bred by the Underhill family, Croton comes from a seed of Delaware pollinated by Chasselas de Fontainbleau, whose seed was planted in the spring of 1863. The vine fruited in 1865 at Croton Point. It has a delicate vinifera/Delaware flavor that is mild, but refreshingly sprightly, with less acid and about the same high sugar content as Delaware.  A good table grape and great for wine production.