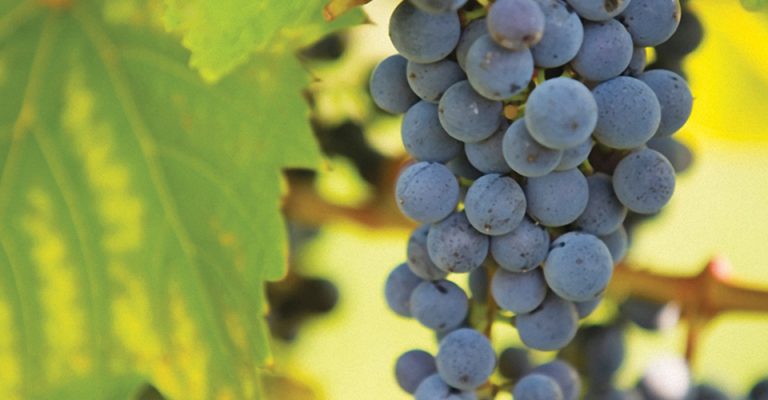 Frontenac is one of the most widely planted of the Minnesota hybrids in the Hudson Valley, successfully bred by grape breeding pioneer Elmer Swenson (1913-2004). Swenson’s work originated on his farm, which he inherited from his maternal grandfather, located near Osceola, Wisconsin. Swenson began breeding grapes in 1943 by crossing French-American hybrid grapes and those labrusca grapes bred at the Geneva Experimental Station in Geneva, NY, prior to World War II, with local riperia or River grapes found near his farm. Riperia grapes are a wild variety found in upstate New York and across the northern third of the U.S. and Canada, and west out to Minnesota.

Swenson’s goal was to produce high-quality grape varieties in the harsh, cold climate of Wisconsin that could be used for table consumption or wine production. At the time, few grape varieties could consistently be relied upon to survive the severely cold winters of Wisconsin and Minnesota. He was inspired by another great American grape hybridizer, T. V. Munson of Texas. Beginning in 1969, Elmer Swenson took a job caring for fruit crops at the University of Minnesota and did some work there—hence the term Minnesota hybrids. However, the bulk of his breeding program remained on his own farm. In addition to Frontenac, among his named varieties are: St. Croix, St. Pepin, La Crosse, La Crescent, and Swenson White.

The grape Frontenac was released by the University of Minnesota in 1996, and is a cross of the grape (Minnesota 1047) x (Riperia 89 x Landot 4511). Frontenac is a blue-black grape that is vigorous in its growth habit. It is a very productive variety that has moderately loose clusters that are long, medium-large to large in size and look similar to the DeChaunac grape. Frontenac ripens by the third or fourth week of September, with high sugars of 24 brix or more. Due to its riperia wild grape heritage, the variety is very high in acid, so it is best to pick Frontenac after it reaches 24 brix or more to counteract its high acids.

Frontenac wines can be very dark and inky or brightly-hued purple, depending on how the wine is made. Despite its heavy, dark color, the wines are of only medium body and structure. The wines can be very high in total acidity, low in tannin, and herbaceous if harvested too early. Even with ripe fruit it can be one dimensional, with flavors of very pronounced dark cherries, plums, cooked elderberries and prunes, and wood. At times, these cherry, plum and elderberry flavors can become too fruity and grapey with elements of cotton candy, bubble gum, or cough syrup-like overtones similar to wines made from the Steuben grape. Unrelated to its fruit flavors, it can also have a distinctive mint/wintergreen flavor component that sometimes integrates well with the fruit, but sometimes does not.

When made as a rosé, the grape’s high acid profile is more in keeping with a white wine. When made as a red dinner wine, its light body sometimes does not integrate with its deep color, so wood aging is suggested. If made properly, a Frontenac red table wine can have good aging potential. It also works well in blended red table wines with grapes such as Cabernet Sauvignon, Merlot, Leon Millot, and Chelois. Due to its heavy color, prune and plum flavors, and high sugars and total acidity, Frontenac lends itself to quality dessert Port production.

Both growers and winemakers in the Hudson Valley seem to like this variety. Along with the other Swenson grape hybrids grown in the Valley — such as St. Croix, St. Pepin, La Crosse and La Crescent — Frontenac should have a place in the Hudson Valley wine scene for a long time to come.