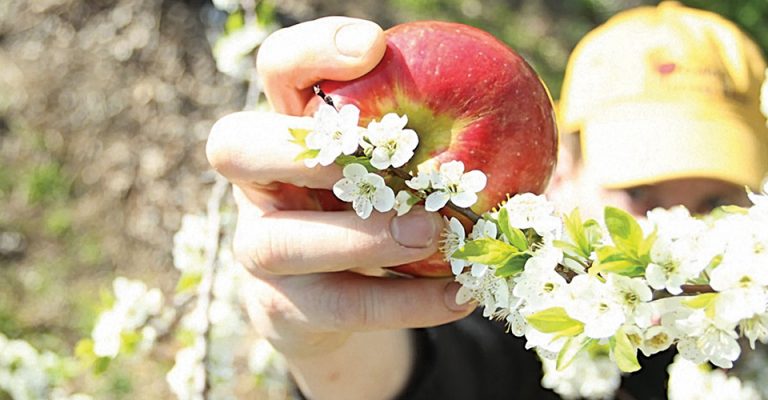 Like rosé wines, fruit wines often do not get the respect that they deserve. While most fruit wines are enjoyably soft, very fruity, and semi-sweet, there are more “serious” fruit wines being made in the Hudson Valley and western New England today. In the Hudson Valley, pomme or bramble fruits are produced as ciders, distilled spirits, fortified dessert wines, and cassis, but this article will focus specifically on still fruit wines.

Today the Hudson Valley is known as a unique fruit-growing region because of the diversity of fruit grown here. That was not always the case. From the early 1870s to the 1910s, growers concentrated primarily on table and wine grapes, such as Delaware and other locally developed varieties such as Jefferson, Dutchess, Empire State, Iona, and Bacchus. Smaller amounts of acreage were devoted to other fruits, but as local grape cultivation declined after 1910 due to increased competition from Californian grape growers, the Hudson Valley’s fruit growers shifted their focus to a more diversified set of ascending fruits, including raspberries, strawberries, apples, cherries, peaches, pears, and currants.

After World War II, the number of available agricultural workers needed to cultivate and harvest these fruits diminished, and with more grown children moving off the family farm, growers began to concentrate on apple varieties such as Macintosh, Red and Golden Delicious, Rome, and Northern Spy. In general, apples could be grown and harvested more easily using mechanized farm equipment, which substituted for the smaller pool of farm labor. Starting in the early 1970s, growers, tired of market fluctuations and being too tied into one crop, again began to shift their production away from standard apple varieties to more unique apple varieties, and eventually back to higher-valued fruit crops such as pears, peaches, strawberries, and raspberries. Today, the Hudson Valley is the second largest commercial fruit producer, with 22% of New York State’s acreage planted in apples, grapes and other fruits.

Turning surplus and overripe fruit into wine became a common practice beginning in the mid-17th century, when Dutch and British colonists first introduced apples and other fruits to the Hudson Valley. Apples were an important part of the diet of early settlers, and they attempted to grow enough apples to consume fresh, from the fall through the winter. Primitive storage methods included storing apples in insulated pits, but the larger portion of the crop was generally consumed as juice, fermented cider, and apple whiskey.

In general, consumers today need a re-education to realize how fruit wines have evolved. Gone are the days of the sickeningly sweet fruit wines and wine coolers of the 1970s and early 1980s. The more commonly made fruit wines in the Hudson Valley today are made from apples, pears, peaches, strawberries, cherries, raspberries and blackberries. It takes a very skilled winemaker to make a quality fruit wine, and blending the right fruit varieties into one wine is critical. The same winemaking and blending practices that are used for making grape wines applies to wines made from other fruits, giving them the same level of sophistication and seriousness.

As most fruits can be fermented, most fruits can be made into wine. Like grapes, the fruit is first crushed, and the juice fermented into alcohol, but the similarity ends there. The winemaker must take into consideration many of the problems that are common in making quality fruit wines. With fewer acids, sugars, tannins and complex flavors to work with, making fruit wines can be trickier than with grapes.

First and foremost, only certain fruit varieties lend themselves to successful wine production at all. This is because, unlike wine grape varieties, most non-grape fruit varieties are not well balanced with the right amount of sugar and acids to produce a stable wine. During the fermentation process, many fruits require the addition of sugar (or honey) to make them not only palatable, but to increase the alcoholic content (sugar is converted to alcohol during fermentation). So, while pomme and bramble fruits may have a fruit/acid/sugar balance that makes them appealing to eat as fresh fruit, this balance is far from ideal for wine production. Hence, the winemaker not only needs the right blend of fruit varieties, but during the fermentation process will often need to add sugars, tartaric or citric acid, or even water to make a balanced wine.

Another concern for the fruit wine maker is that many tree and bush fruits – particularly apples, peaches, plums, pears, gooseberries, and quince – have an abundance of pectin, while fruits such as grapes, cherries, and strawberries do not. Pectins, also known as polysaccharides, are a naturally occurring, soluble dietary fiber. In essence, pectins are used as food thickeners and are found in fruit jams, preserves and gelatin but are a great concern to the winemaker who is making, hopefully, a clear and stable wine. While the presence of pectins is generally not a concern when making apple or pear ciders, it can cause wines to become cloudy and have a thick viscous body, not acceptable for a commercial grade table wine.

Yet another consideration in making quality fruit wines is that they tend to lack tannins, which is the acid that gives body and substance to a grape wine. Instead fruit wines have much higher levels of malic and tartaric acids in their composition. These are sharp tasting acids that can contribute to the pleasantly sour or tart taste associated with fruit wines. As many of the berry fruits are high in acid, amelioration (adding water), or limiting the quantity of berries or fruit to the volume of water used, is one common solution for a balanced wine.

Sometimes the color of a fruit wine is not stable and can brown after a year or so. This is especially true with apple, pear, strawberry, and raspberry wines. Hence, the winemaker will often add some naturally occurring hues, or a concentrated juice to help stabilize or enhance the color.

As is the case with grape wines, fruit wines can be blended to include more than one variety of a specific fruit. In addition, different fruits can be blended into one wine to add beneficial elements of color, nose, bouquet, balance, or acid structure. For instance, some raspberry wines have added red currant juice because this adds substance, structure, and color stability to the wine. Further, some apple wines and ciders will have small amounts of red or white fruit juice added to them to give these wines more complexity and interest. Hence, the base wine may be a neutral apple or grape wine, with other fruits added to give the wine more appeal.

As a general rule, most fruit wines are not aged at all and should be consumed within one to two years. Some apple and pear wines, however, are aged in oak barrels to impart tannins and add more complexity, but for the most part, fruit wines are made in a simple style in glass or stainless steel containers so as to retain, and enhance, their inherent fruity qualities and bright aromas.

Fruit wines can be made in a bone-dry, dry, semi-dry or semi-sweet style. Due to their high concentrations of malic and tartaric acids, many fruit wines are finished off slightly sweet to offset these front-forward acids. Winemakers can also add fruit wines to their more neutral house white or sparkling wines to spice up these ordinary wines.

Inside the Bottle – Fruit by Fruit

There are hundreds of apple varieties grown in the United States, some of them originating in the Hudson Valley or western New England, among them Northfield Beauty, Esopus Spitzenberg, Roxbury Russet, Baldwin, Newtown, Pippin, and Winesap. They are more suitable than other varieties to make apple wine or hard apple cider, due to their high acid content and sugar levels. To increase apple wine quality, two or more apple varieties are often blended together into one wine. Winemakers can also make these apple varieties into wine separately, and then “back blend” them (i.e., blend two different wines) later to create a more balanced and unified apple wine. Try: Applewood Winery’s Apple Blossom Blush, a unique blend of apples and grapes; Baldwin Vineyards Apple Wine made from three varieties; and Brookview Station Winery’s Whistle Stop White, a semi-dry apple wine.

The varieties used to make pear wines include many that were developed in Europe, New England, and the Hudson Valley, including Bosc (Belgium), D’Anjou (France), Bartlett (England), Seckel (Pennsylvania), Highland (New York) and Lawson (Ulster Co.). Each distinctive pear variety can add its own unique set of flavors to a pear wine. Try: Brookview Station’s semi-dry pear wine, Oh What A Pear.

Peaches, which in the past had been a secondary fruit crop in the Hudson Valley, have been increasing in popularity. Varieties grown in the Hudson Valley include, Brighton, Champion White Peach, Elberta, Hale Haven, J.H. Hale, and Red Haven. Try: Glorie Farm Winery’s Peach Wine, a semi-sweet wine made from 100% fresh local peaches.

The Hudson Valley was also a national center for raspberry production at the turn of the 20th century, though most of the production was devoted to the fresh fruit market. Varieties of raspberries, many of which were developed in the Hudson Valley, included Cuthbert, Hudson River Antwerp, Newburgh, Empire, Coutant, Highland Hardy, Marlboro, Perfection, and Pride of the Hudson Valley. Some of these have made it into Hudson Valley wines. Try: Baldwin’s Raspberry Wine, made from black raspberries.

In addition to raspberries, the Hudson Valley grows many blackberry varieties, mostly grown for the fresh fruit market. But increasingly these berries are also finding their way into dessert wines and spirits. Similar to blackberries, strawberries are commonly grown in the Hudson Valley and used in the production of wine. Try: Applewood’s sweet/tart Blackberry Wine; Baldwin’s renowned Strawberry Wine, made from 100% fresh strawberries; and Brookview Station’s sweet Strawberry Sunrise.

For cherry wines, the varieties most often used in the Hudson Valley include Bing, Black Tartarian, Emperor Francis, Hedelfingen, Hudson, Kristin, and Ulster. Each cherry variety gives the wine a different flavor element, such as a deeper or lighter color, and unique bouquet and acid profiles. Try: Baldwin’s Cherry Wine, made from 100% fresh cherries; and Brookview Station’s Scarlotta Bing, a black cherry wine made from locally-grown cherries.

During the late-19th century and early- 20th century, the Hudson Valley was one of the largest areas in the United States to cultivate red currants, primarily in the towns of Newburgh, Marlborough, and Lloyd, but although many varieties were developed, most went into the production of jelly, rather than wine. Black currants virtually disappeared in the Valley, after a near century-long ban on their cultivation, but since the lifting of the State ban in 2003, black currants are again being used to produce currant wines and cassis. Try: Glorie Farm Winery’s sweet and tart Black Currant Wine, made from their own black currants.

Next time you visit some Hudson Valley wineries or your local wine shop, try some locally produced fruit wines. These wines will find a niche in your wine consumption patterns, and bring new variety to your consumption of wine with food.