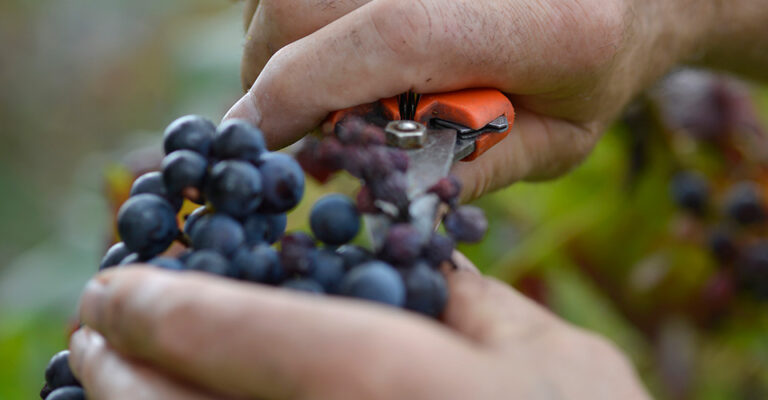 So who’s ready for some good news?

While 2020 continues to be a historically challenging year for Americans, the upcoming harvest has Hudson Valley winemakers and cider makers feeling cautiously, of all things, optimistic.

Not that the COVID crisis hasn’t had its effect on the local craft beverage industry. For vineyards and orchards that allow visitors for tours and tastings, the pandemic has meant a radical restructuring and rethinking of how to interact with the public. At Angry Orchard in Walden, this season was supposed to be marked by the opening of a new tasting room; instead that tasting room is being used as an office. At Whitecliff Vineyard in Gardiner, co-owner Yancey Stanforth-Migliore said that not being allowed to interact in the tasting room with the general public, except to bring wine samples to tables before scurrying away, has her feeling less like a winemaker and more like a waitress. “The job of selling wine isn’t as fun right now because we’re not talking to people face to face about our wines,” she said. “Everything we’ve built now is designed to build distance between us and our customers.”

We have the potential for very high quality grapes…if things continue as they are, this will be a vintage year.

That’s if you’re even allowed to open, points out Ed Evans of Milea Estate Vineyard in Staatsburg, who unveiled a new tasting room last October while enthusiastically looking forward to what he and his colleagues assumed would be a busy 2020. “We’re a farm winery,” said Evans. “So what reopening category do we fall under? Are we a bar? A restaurant?”

But if you leave the tasting rooms and package stores behind and head out into the fields, the outlook is surprisingly sunny. “We have the potential for very high quality grapes,” said Stanforth-Migliore. “And that’s exciting. If things continue as they are, this will be a vintage year.”

“The quality of fruit is going to be above average,” said Matthew Spaccarelli, a winemaker for both Benmarl Winery and Fjord Vineyards in Marlboro. “And the better the fruit that’s coming into the cellar, the easier my job is as a winemaker.”

The growing season did not begin on an auspicious note. In March, as much of the state shut down for quarantine, the weather grew unseasonably warm. Spaccarelli said that at his vineyards, March was warmer than April. Above average temperatures caused fruit trees and vines to bud early, setting them up for a deadly late frost that came at an unusual date.

“May 14th,” said Stanforth-Migliore. “You can tell you’re talking to a farmer when they can tell you the exact day it got cold.” May 15th is considered the last possible frost date in the Hudson Valley, so to have one slip in just under the wire was nerve-wracking for local farmers. If you needed further proof of how microclimates can have a macro effect on farms and vineyards in the same region, consider the fact that if the temperature had dropped less than half a degree more that night, Whitecliff would have lost most of their primary buds. For other growers, it wasn’t enough. Less than twenty miles north, about 90 percent of the vineyards at Benmarl and Fjord got frosted out that night.

Angry Orchard was able to avoid the worst effects of the late frost simply by virtue of what they had in the ground. As Ryan Burk explained, when they bought the orchard five years ago, they began a process to transform the apples being grown from culinary apples to cider apples. “The orchard is now about 75 percent traditional cider varieties,” he explained. “We still have some culinary apples left from when we purchased the farm but this is the last year that we’ll have those. Those will all be gone next year.” Cider apples ripen later in the year than culinary apples, which means that when the May 14th frost descended, their apple trees hadn’t budded yet.

Those traditional cider apple trees are bearing their first heavy crop this year, making this season a particularly significant one for Angry Orchard. “A lot of these traditional cider varieties aren’t grown in many places outside of Europe,” said Burk. “They’re the kind of apples that get cider makers excited. We’re pretty fired up.” The European varieties include Yarlington Mill, Kingston Black, and Dabinett. “It’s an English or a French apple,” said Burk about the latter. “Depending on whether you ask the English or the French.”

After dodging the early frost, the orchards at Angry Orchard benefited from the same conditions across the Valley that have grape growers so excited: “Dry at the right times, wet at the right times,” said Burk. “We’ve got a pretty heavy crop this year.”

The warm and dry summer was a lifesaver to Spaccarelli after losing so many buds to frost. “We were able to play a lot of catchup with growing degree days,” he said. “I think we had 13 or 14 days above 90 degrees in July. A lot of the days that weren’t 90 degrees were 88, 89. We’re set for a couple more 90s this coming week, so everything’s moving along.” And while the summer was dry, the rain that did come came just at the right time, in short but intense bursts. That’s led to very little canopy disease development. “I haven’t seen a spot of either downy mildew or powdery mildew in any of our vineyards yet,” he said. “If you have a healthy canopy, it’s going to ripen well.”

Quality not quantity: That’s the motto that Spaccarelli is taking into the fall. He may have lost a significant amount of fruit in May, but the grapes that survived are looking good. “It’s relatively balanced,” he said. “I don’t expect to drop much fruit, which is nice.”

“It’s an early season and things are moving fast,” said Evans at Milea, where the five person crew — six if you include Bruce Tripp, the winemaker — was out in the fields, working around the clock to prepare for what’s shaping up to be a bountiful harvest at both Milea itself and other Hudson Valley vineyards they manage. “We’ve got some nice crops and Bruce’s mind is turning to what we’re going to do, and the word is we’ll have a couple of estate wines coming up.”

The better the fruit that’s coming into the cellar, the easier my job is as a winemaker.

After a busy summer outside, none of the winemakers or farmers we spoke to were concerned about COVID affecting their harvesting operations. The advantage of having small crews is that it’s very easy to practice social distancing outside while working, as everyone has all summer. “We’re already kind of spread out and on our own,” said Evans. And just as everyone’s excited about the current agricultural conditions, the local epidemiological conditions also continue to be a source for optimism. “Thankfully New York did a good job early on so that we’re not dealing with it as rough as other places right now,” said Spaccarelli.

Where COVID-19 comes into play is when the fruit is harvested and it’s time to figure out what to make with it. Burk noted that almost all of the cider made at their Walden orchard is sold out of its on-site shop. “With that closed, it’s slowed down the sales of the cider that we specifically make there,” he said. The orchard is beginning to open for some outside tastings, but there’s no way to accommodate the 3,500 visitors a week the orchard usually gets in the Fall. That probably means making less of the exclusive on-site blends that they’ve made in the past, since there won’t be as many people coming through the doors for them.

It also means making decisions about if the cider that’s been aging in barrels for a few years in anticipation of being used in blends this year will have to keep on aging. It’s a risky proposition since cider can’t ferment and age for as long as red wine can. “Maybe we’re going to do something different with it this year,” he said. “Maybe we’ll do some distillation. That’s where the effects of COVID are showing up, in the actual cider production. Because we can’t keep it around for very long. I mentioned we’re going to have this big amazing year, but now we’re figuring out how we’re going to sell the cider that’s come from all that fruit.”

Still, having too much of a good thing is a better problem to have than not enough of it. Considering how the year began, Hudson Valley winemakers and cider makers have a lot to be thankful for, and a lot to look forward to.