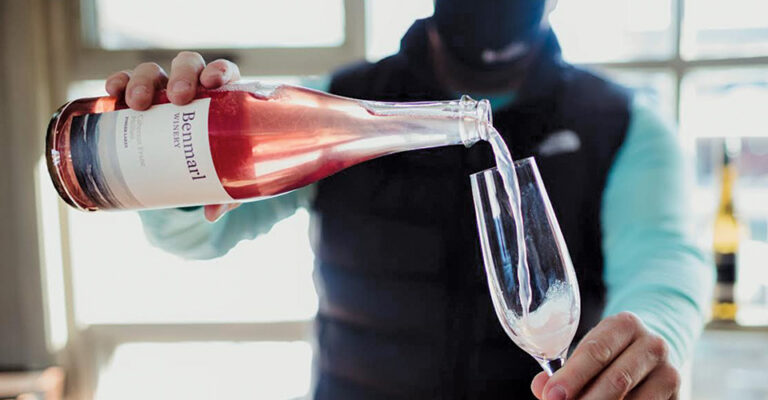 The pandemic proved something wine lovers have long suspected: there is no bad time to drink sparkling wine. Even during a worldwide crisis, people found plenty of reasons to pop a bottle, perhaps finding that the effervescent bubbles helped buoy their spirits.

Sales of sparkling wine in the U.S. grew 13% in 2021, according to sales data from beverage market analyst Nielsen IQ and online wine sales platform Drizly. That trend is expected to continue, according to an analysis from Allied Market Research, which projects a compound annual growth rate of 7.3%. In 2019, sparkling wine sales were valued at $33.9 billion, but by 2027, they’re expected to reach $51.7 billion. And while sales of sparkling stalwarts like Champagne and Prosecco increased, producers all over the world making every type of bubble at a variety of price points are seeing sales fizz up.

The sparkling wine industry as a whole is evolving quickly to keep up with the public’s considerable thirst. Right here in the Hudson Valley, the incredible diversity of the sparkling wine market is beautifully represented. Arguably it’s one of the most exciting regions with all types on offer, from elegant Champagne styles to fun, casual Pét-Nats.

Read on for insight into the array of delicious sparkling sips that await.

Brotherhood Winery has been making sparkling wines in the Hudson Valley for decades. When Jesse M. Emerson and his sons Edward and Jesse Jr. purchased the winery in 1886, in addition to expanding the operation and increasing production of table and fortified wines, they began experimenting with Méthode Champenoise wines.

When Prohibition was repealed in 1933, the winery released its cellar of 500,000 bottles of 1915 vintage sparkling wine. Today, the winery produces classic Champagne-style sparklers and Charmat style wines. (See sidebar for descriptions of sparkling wine styles.)

Our popular ‘B’ sparkling line is more widely available.”

The B Riesling, B Chardonnay, and B Rosé Cuvee (made from Chardonnay and Pinot Noir) is priced for everyday consumption, at $15. The B Rosé Cuvee, Barrow says, is their most popular, with about 1,000 cases hitting the market annually, while the others are around 300 to 500 cases. The Méthode Champenoise is available at $45, and the complexity of the production process keeps the output small—around 100 cases.

“We truly make it by hand,” Barrow says.

“We started making sparkling wine because we personally love it,” says Yancey Stanforth-Migliore, co-owner of Whitecliff Vineyard & Winery with her husband, Michael Migliore. “We also knew early on that we wanted to use our own estate-grown fruit, so we could truly show what the Hudson Valley is capable of.”

Since 2006, the pair have been building up their labor of love into a cult phenomenon.

“The equipment to make sparkling wine is expensive, and we have been buying it, piece by piece, second-hand,” Stanforth-Migliore explains. “We really wanted to focus on Méthode Champenoise, but unlike wine production, there’s not really a book on how to make Champagne. Producers can be very protective of their techniques. So there was a lot of trial and error, and we have made every mistake, from having corks fly out too fast, to needing a corkscrew to pop the bottle.”

The current line includes a Blanc de Blanc and a Rosé from estate grapes. This year, a sparkling Gamay Noir will enter the mix. For the first six years, they made 20 cases a year. Now, they’ve steadily risen to 300 cases, and they hope to plump that up this year with the addition of the Gamay Noir release.

“These bottles used to be a hand-sell, but now they sell out because people who love them, really love them,” Stanforth-Migliore says.

From Rarefied to Rustic

“We’ve been making Méthode Champenoise wine since 2012,” says Laura Cypress, Benmarl Winery’s winemaker. “But we don’t make it every year, because the vintage has to be right and it requires a lot of time and effort to bottle, re-ferment, and disgorge.”

Because Cypress finds that sparkling wine allows the terroir of the Hudson Valley to shine, and is something their supporters want to see more of, they’ve expanded the line to include Pétillant Naturel wine production.

“The Pétillant style takes a bit off pressure off and makes sparkling wine more of an everyday wine that we can offer,” Cypress explains. “We don’t disgorge them, which means you
can see a layer of yeast in the bottom of the bottle, which is responsible for producing the carbon dioxide bubbles. It’s a reminder that wine is a living agricultural product, with its own quirks and natural variations.”

The line of Pét-Nats retail for around $30 and include a rosé of Cabernet Franc and other Bordeaux varieties, a red, which is Malbec-driven with a bit of Frontenac, a “juicy high-acid hybrid that makes the wines really lush,” Cypress says. When the vintage allows, Benmarl produces a Blanc de Blanc and Blanc de Noir. Currently, sparkling wine makes up about 10% of Benmarl’s 10,000 case production, with plans to continue to grow the line.

“We’re glad to make classic sparkling wines and ones that are a little more rustic in style, which we hope encourages people to drink bubbles for more than just parties and occasions,” Cypress says.

“We already produce several sparkling wines, and we’re about to significantly expand that production,” says Milea Estate Vineyard’s general manager, Russell Moss. “We are investing serious capital, labor, and time because we see sparkling wine as the future for Milea and the Hudson Valley.”

Currently, Milea produces two frizzante style wines made in the Charmat method from a blend of estate-grown hybrid and vitis vinifera. The non-vintage Proceedo Rosé and Proceedo White are successful, but Milea aims to grow its 6,000-case annual production by at least 50%, and with the winery’s recent purchase of Clinton Vineyards, Moss is excited to expand and enhance both lines—combined, Moss says, production of sparkling will increase 75%.

“We are relaunching Clinton as a focused sparkling brand,” he explains. “And we are about to introduce several exciting Méthode Champenoise wines at Clinton from our partnership
with Scott Dwyer, a top sparkling wine consultant in Oregon.”

One line offering a Brut Blanc de Blanc and a Rosé will be called Left Bank, and will be made from grapes grown in Oregon under Milea’s direction and produced under their supervision by Dwyer. Another, a tête de cuvée, will include Oregon and New York grapes.

Grapes for sparkling wine always have to be picked early to maintain their freshness and bright flavors, and in the Hudson Valley, that . . . allows us to show off both hybrid and vitis vinifera grapes at their very best.

“We think Ode will be the name, and it represents our ode to America,” Moss explains.

The third will be dubbed Right Bank, and it will include all New York-grown grapes, from the Hudson Valley and Long Island.

“I can’t wait to introduce these wines, and continue to grow the sparkling program,” he says. “To me, it makes sense, especially here. Grapes for sparkling wine always have to be picked early to maintain their freshness and bright flavors, and in the Hudson Valley, that really allows us to cut back on the risk of disease pressure, and allows us to show off both hybrid and vitis vinifera grapes at their very best.”

The micro-winery Nostrano Vineyards produces close to 250 cases a year, but the winery’s co-owner Kayleigh Bozzo says they are thrilled to be bottling their very first sparkler this year.

“We’ll be using our estate-grown Riesling.” Bozzo says. “We are excited to expand into sparkling, and we’re actually planning to use about half of the harvest this year on a Pét-Nat named after our second daughter, Aria Rae. We’re calling it Arae.”

Quartz Rock Vineyard is also queuing up a new release.

“We made a bottle-conditioned, lightly filtered Valvin Muscat this year that’s slightly sparkling,” co-proprietor Jacqui Ferrari Heavens says. “And we’re planning to bottle our first sparkling wine too. It’s a blend of Concord, Niagara, and Seyval Blanc. We’re calling it our Marlboro Mountain blend because we grew the grapes in multiple locations at multiple vineyards up and down the mountain.”

For tastemakers and shopkeepers, the future for Hudson Valley sparkling wine seems very auspicious, and despite the region’s long history of creating a wide variety sparkling wines, it seems much terroir remains to be explored.

Retailers like Paul Brady, owner of Paul Brady Wine in Beacon, would love to carry more Hudson Valley-grown sparkling wine in his shop, especially from growers of labrusca grapes.

“Certain grapes, like Delaware, Catawba, Isabella, and Elvira are well-suited for sparkling production,” Brady says. “And while we have carried many sparkling wines from Hudson Valley wineries, often the wines were produced from grapes from the Finger Lakes, or were blends of multiple regions. They’re labeled New York State, instead of Hudson River Region. I am not against blurring the AVAs, but I also enjoy drinking wines from one place, and I see consumers feeling similarly.”

Paige Flori, co-owner of Boutique Wines, Spirits and Ciders in Fishkill, is also seeing an uptick in interest in locally-produced sparklers at her store.

“Buyers love the Benmarl Cabernet Franc Pétillant,” Flori notes. “They relate to the fact that the winery is family-owned and operated, and they love this approachable, affordable, quality sparkling wine.”

Personally, she’d love to see more sparkling red wines from the Hudson Valley, but she also has a soft spot for Whitecliff’s Blanc de Blanc. “It’s light, crisp flavor and tiny bubbles are the perfect aperitif,” she says.

There’s always been a lot to celebrate about the Hudson Valley’s terroir. But in bubble form—made in any method, from hybrid, labrusca, or vitis vinifera—it seems like the region may be ready to stride onto the world stage. Luckily for us, producers are still pricing their most rarefied, labor-intensive bottles for a song.