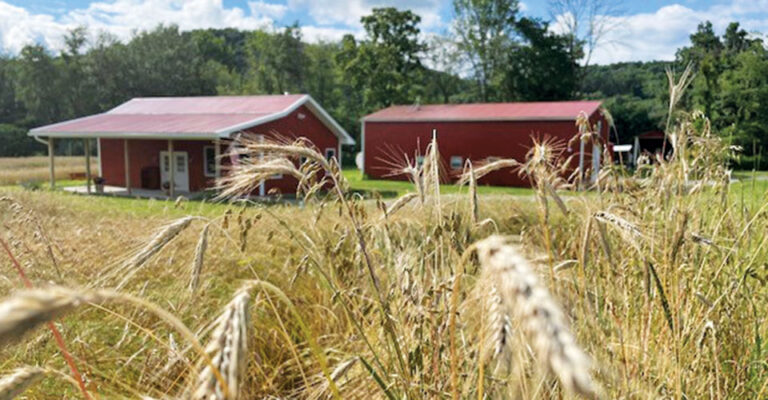 From the top of a hill in Claverack, John Frishkopf can see the future of craft spirits in New York, and it’s looking wide open.

“You see the Catskill range to the west, the Taconics to the east, you get an idea of the magnitude of the experience,” said Frishkopf of the spot where construction is beginning on a state-of-the-art distillery known as Klocke Estate. “We want to create a world-class brandy, and of any place in the U.S., this is the place to do it.”

Fifteen acres of grapes and 25 acres of cider apples have already been planted. When construction finishes next year, Klocke Estate will become an “earth-to-glass” distillery making brandies out of the fruit grown on their 180-acre property and the surrounding area.

When guests enter the Estate they will ascend the hill and be surrounded by the vineyards and orchards leading up the distillery where the brandies are made. At its heart, the guest experience will be reflective of the Estate in its holistic approach, offering immersive distillery experiences coupled with earth-to-glass brandy and terroir-driven menu offerings supported by hospitality that reflects the spirit of the Hudson Valley.

Klocke may be the newest craft distillery to plant its flag in New York’s fertile soil, but they’ve got company. The state’s craft spirits industry has been booming over the past few years, with more and more distilleries opening every year. “We have over 100 members now,” said Louise Newsome in reference to the New York State Distillers Guild, of which she’s a board member (in addition to being the co-owner of Cooper’s Daughter Spirits at Olde York Farm). “We didn’t have that many when I joined the board over three years ago. We’ve doubled.” A recent report by the Guild stated that there are now 160 distilleries in New York, generating over $3 billion in direct economic activity, and directly employing over 6,000 people.

What’s the takeaway from this rapid growth? For starters: Laws have consequences.

Derek Grout of Harvest Spirits got the state’s first Farm Distillery License 15 years ago after working for years to get the laws changed to benefit small farms who wanted to distill spirits using their own bounty and let consumers taste the spirits directly on the farm. “I didn’t realize when we were pushing for this legislation back in 2006 that it would help create an industry,” he said. But looking back, Grout said it wasn’t a lack of entrepreneurship or know-how that was holding the nascent industry back, it was the laws.

Once the laws changed, the spirits industry was able to ride the same wave of interest from consumers who were driving the farm-to-table movement and the craft beer movement. It’s taken a few years, but now that consumers have found that they can have the same experience with spirits, there’s no going back. Even with
New York distillery licenses easier and cheaper to get, new distilleries can’t open fast enough…and others are seeing the success and want to get in on the action.

“Ten years ago I thought we’d be a sleepy little three or four person operation, plateau and have a nice steady, comfortable existence,” said John Curtin of Albany Distilling Company. “And what we’ve seen is that demand has far outstripped our ability to produce—which is a good problem to have!”

I didn’t realize when we were pushing for this legislation back in 2006 that it would help create an industry.”

Curtin has been able to kit out his whole bar at the distillery using nothing but New York craft spirits made by him and his fellow distillers across the state, a feat that he said would have been impossible even a few years ago. Now he’s hoping other local bars will follow suit. “I would love to walk into a bar and instead of just seeing Jack and Jim and Maker’s, I’d love to see one or two of those and then a dozen New York whiskeys.” Bars may change their mind soon enough as the quality of local whiskeys continues to improve. As Jeremy Kidde from Black Dirt Distillery pointed out, we’re only in the beginning of the second decade of the local craft spirits industry, which means that whiskeys and brandies that have been aged for ten years or more are only starting to become available to tasters now.

And you may be surprised as to who’s going to be drinking those aged spirits. Paul Coughlin of Taconic Distillery said that when he first started making whiskey, he thought of it as a “football drink,” only enjoyed by men in the fall. He was wrong on both counts, and he credits his own growth in the industry to the fact that both men and women are enjoying his spirits year-round.

Stories in a Bottle

“There’s an increasing number of distillers like us who grow what they use for their spirits,” said Rick Kneipper of Shady Knoll Distillery. “People are starting to recognize that, just like in wine, you want to know where your spirits come from. That helps wonderfully because then people want to come and visit, and see your rye growing in your fields and your apples growing in the orchards.”

Kneipper also thinks the incredible versatility and different flavor profiles that spirits offer is drawing in wine lovers and beer drinkers who are looking for something new. “Some people say they’ve never tasted anything like this before,” said Kneipper about one of his whiskeys. “That’s what I think is drawing people. They’re having taste sensations they’ve never had before, they think it’s interesting, they want to see where it’s coming from and where it’s made. That happened with wineries decades ago and now it’s just starting with craft spirits.”

At Stoutridge Distillery, Steve Osborn has had a unique vantage point to the craft spirits boom. Starting out as a winemaker, Stoutridge has shifted to producing more and more spirits over the past four years. Osborn agrees that the same feeling of intimacy that drew consumers to visit local vineyards is now fueling the spirits revolution, as consumers realize they can get the same feeling from a distillery.

“If you go local you can learn more about it,” he said. “You can get a nice story. The products aren’t just a label. There’s someone behind the label. People want an experience, and then they want a product that reminds them of the experience.”

...we’re only in the beginning of the second decade of the local craft spirits industry, which means that whiskeys and brandies that have been aged for ten years or more are only starting to become available to tasters now.

But if the change in laws helped birth the industry fifteen years ago, it’s legislation that is now holding the industry back. Distillers rejoiced when, during the COVID pandemic, they were allowed to ship their products directly to consumers in-state for the first time ever. Then the laws were rescinded with little advance notice.

“We all got to dip our toes into it because of COVID and we saw how powerful it was,” said Newsome of the direct-to-consumer law that was temporarily on the books. “And how much the consumers want it. COVID changed everything.” Kneipper at Shady Knoll pointed out that small distilleries can’t possibly compete with the large marketing budgets and distribution infrastructure of national distilleries, but being able to permanently sell directly to consumers, ideally across the country, would help level the playing field. As a model, he pointed to the small vineyards of California, who have been able to thrive by growing their mailing list of vineyard visitors on vacation throughout the years, and then continuing to sell to them for years to come, without ever having to try and get their wines on store shelves nationwide.

If the direct-to-consumer laws change, the growth in New York’s distilling industry could be something sustainable, instead of a boom-and-bust. Klocke Estate may be the newest distiller in the state, but Frishkopf is taking the long view. He first fell in love with brandy after visiting some of the most famous distilleries in Europe, ones that have been around for hundreds of years, and was humbled meeting distillers who were barreling spirits that they knew wouldn’t be opened until after they were gone. Craft distilling in New York may be becoming trendy, but Frishkopf’s goal is to build something that will outlive trend after trend after trend.

“I love that idea of a legacy distillery that will be producing for the next century,” he said.

If the craft spirits industry has been booming, the canned spirits industry is absolutely exploding. NielsenIQ recently announced that during the 4th of July holiday period this summer (defined as both the two weeks before the holiday and the two weeks after it), national sales of ready-to-drink (RTD) spirits were up 67% compared to 2020, and an astonishing 428% since 2019.

Part of that is driven by COVID: Consumers got used to being able to get to-go cocktails from bars in New York during the pandemic, but with that no longer being legal, they’re popping open a can instead. They also served as a convenient alternative to mixing drinks at home, said John Curtin from Albany Distilling Company, who started making canned vodka cocktails in addition to their whiskeys, rums, and vodkas.

“With COVID, and people not being able to go out anymore, if they want a cocktail, canned cocktails are an easy alternative to buying a dozen ingredients,” he said. “Even at bars, with social distancing, it’s nice to just crack open a can and hand it over instead of everyone crowding around the bar.”

But Matt Green of Beacon’s newly-opened Liquid Fables thinks that the RTD market hasn’t even begun to take off. Green worked in the craft beer industry for years before striking out on his own to develop his own line of canned cocktails, each named after a different one of Aesop’s fables (although future cocktails may be based around mythical creatures as well). As he sees it, craft beers introduced consumers to big flavors such as sours and IPAs, as well as their higher alcohol content compared to domestic, mass-market beers. Now those consumers are looking for something else that’s big, bold, and flavorful.

“With beer, you can do a lot, but with liquor there’s the ability to go in so many different directions,” he said. “I think liquor works a lot better with some of the farm products in the Hudson Valley, too.”

Liquid Fables’ initial offerings include “The Town Mouse & The Country Mouse,” a gin-based cocktail with blueberries and basil, and “The Lion in Love,” a rye whiskey-based cocktail with raspberry and maple syrup. “We wanted people to be able to smell the rye, but the maple syrup cuts the harshness and gives it a little more mouthfeel, so it has a richer flavor and is dangerously easy to drink.”

An avid outdoorsman, Green also thinks that consumers will find that RTD spirits can go places regular spirits never can. “I don’t want to pack glass bottles and a shaker in my backpack when I go on a hike,” he said.

But Green said that bartenders shouldn’t worry. “There’s a lot that goes into a cocktail at a bar that you can’t do in a can,” he said. “There are ingredients that you don’t want to put in a can, there’s the appearance, the glass, there’s all that. When I go to a nice restaurant, the appearance of the cocktail is just as important to me as the flavor.”