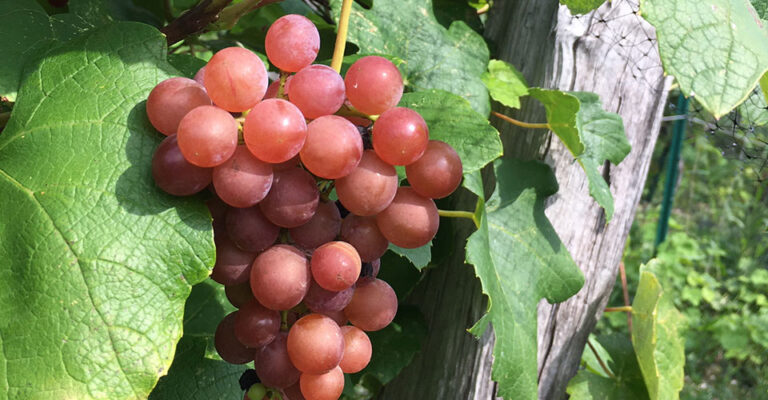 Like the Hudson Valley, J. Stephen Casscles’ fruit growing roots run deep. His grandparents were fruit growers and brokers in Marlboro who first taught a young Casscles about the heritage grape breeds that were first developed in the Hudson Valley. Inspired, Casscles started growing his own grapes when he was still in high school, and then went on to work for, and then make wine with, local wineries such as Benmarl from 1973 to 1966, and then Hudson-Chatham Winery from 2007 to 2020. All the while, Casscles experimented with the forgotten and out-of-favor grapes of the Hudson Valley on his own property, making wines from them, and experimenting. As of now, he has around 100 different varieties growing on his four acre property. “Grapes you’ve never heard of,” he said.

This year, two long-ripening fruits of that lifelong passion will finally be brought to bear. The first is an updated second edition of his 2015 book Grapes of the Hudson Valley and Other Cool Climate Regions of the United States and Canada, due out before the end of the year. The second is the formation of the Hudson Valley Heritage Wine Project, a collaboration with Milea Estate Vineyard which will allow for further planting of heritage grape breeds and the making of unique wines with them. The project will reintroduce to the wine world the major contributions that the Hudson Valley has made to American horticulture and hopefully encourage other vineyards to start cultivating these heritage varieties as well. For Milea, it’s another opportunity to further distinguish themselves, as the wines made through the Heritage Project will be made with grapes that almost no one else in the world is currently using.

Casscles is defining “heritage grapes” as any grapes that are either native or culturally significant to the region. Growers in the 1800s such as James H. Ricketts, who bred and grew dozens of new varieties in what is now downtown Newburgh, helped create the Hudson Valley’s prosperous 19th century fruit trade by developing hybrid grapes that could thrive in the Valley’s cold winters. Many of the grapes’ names point to their birthplace: Dutchess, Putnam, Newburgh, Empire State, Quassiac, and Iona, to name a few. Despite their unique character and rich heritage, these native grapes had fallen out of favor in recent decades as vineyards turned to more popular, well-known vinifera grapes—varietals that the casual consumer was familiar with because they were being grown in mass quantities around the world.

Also left out in the cold, and being revived by the Heritage Project at Milea, are the “culturally significant” French hybrids that were brought (ok, smuggled) to the United States by Philip Wagner, owner and winemaker of Boordy Vineyards in the Finger Lakes, just before World War II. These contraband cuttings laid the groundwork for the rebirth of the Hudson Valley wine scene from the 1950s to the 1970s, made popular by local francophiles who modeled their wineries here on the French estate system, spoke French, and injected a bit of joie de vivre into the Hudson Valley cultural and culinary scene. The Heritage Project continues Wagner’s legacy in a very literal way: Before he passed away in 1996, Wagner gave some of his hybrid plantings to Casscles, allowing him to carry on the lineage.

With 100 varieties packed into four acres, there currently isn’t enough of many of the heritage varieties that Casscles is growing on his property for a whole lot of single-varietal wines, so Milea is dedicated to planting more Heritage cultivars at Milea Estate and their newly acquired Clinton Vineyards.

There already are a few wines available for purchase in Milea’s tasting room, and there are more plans to offer them to guests at certain tasting events throughout the year as well as through the vineyard’s wine club.

The 2020 “Annie” is named after a single chance seedling that Casscles discovered in 1990 and has since propagated enough to offer this deep red with layered flavors of cooked black raspberries, soft black currants and lilac, for the first time anywhere. The 2020 Jefferson, a dry white with elements of melons, guava and bananas, is made from one of Ricketts’ most productive blends, and is also the first commercially produced Jefferson in the world.

But the line of Milea’s Hudson Heritage wines are more than a historical footnote. The reason Casscles was able to bring these grapes back to life from just a few cuttings and seedlings, and the reason they were originally so popular, is because they are uniquely developed to not just survive, but thrive in the Hudson Valley’s variable climate. They were bred to be able to handle cold winters, hot summers, disease, drought, and whatever else Mother Nature can dish out.

“We used to say that you’d have ‘Jack Frost on the pumpkins’ around the first week of October,” said Casscles. “Last year, I don’t think I had my first frost until the second week of November. Then it basically stays warm until just past Christmas, and then the polar vortex comes, it goes down to zero, and kills things. So you’ve got to have grapes that are resilient.”

By embracing the past through the Heritage Project, Milea Estate Vineyards is preparing to weather the uncertainty of the future.

To learn more about the Hudson Heritage Project, visit the website.